3 Years Later: The Impact of the Panama Canal Expansion on Supply Chains

On June 26, 2016, the expanded Panama Canal was opened. At the time, there was fanfare a’plenty, with the Panama Canal Authority’s public relations department declaring that the long-delayed opening “...Ushers in a New Era of Global Trade.” Three years later, it’s time to assess whether or not the expanded canal has lived up to these lofty promises – and just what impact it’s had on shipping in the U.S. 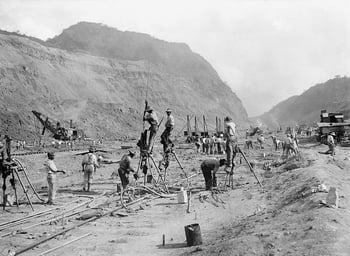 Since the 1930s, all canal-widening studies agreed that the best long-term solution to the increasing congestion in the canal was a third set of locks, significantly larger than those originally built in 1914.

The U.S. actually began excavating these new locks in 1939, but halted work after the outbreak of World War II. The expansion was taken up again in 2007, with a targeted completion date of 2014. However, delays pushed that opening back to June of 2016.

By doubling the capacity of the canal, the project sought to not only accommodate the ever-increasing size of cargo ships, (today’s generation of neo-Panamax ships are built at a scale undreamed of in 1914), but also fight growing competition with the Suez canal, which, over the last 10 years, has taken an increasing share of Panama's activity. 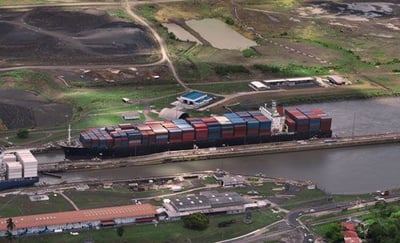 The original locks were built to accommodate Panamax ships carrying roughly 4,500 TEUs (twenty-foot-equivalent units). But these new, larger locks allow the passage of neo-Panamax container ships with a capacity of up to 15,000 TEUs.

That dramatic increase means that the new locks can now accommodate roughly 79% of all cargo-carrying vessels, up from 45% prior to the expansion.

Obviously, that has enormous implications for heavy shippers. And no country ships more through the Panama canal than the U.S.

Nearly 70 percent of all cargo that passes through the Panama Canal either originated from, or is headed toward, the United States. And long before the expansion even opened, there was a spotlight on how the increased traffic would alter container traffic patterns to the U.S. 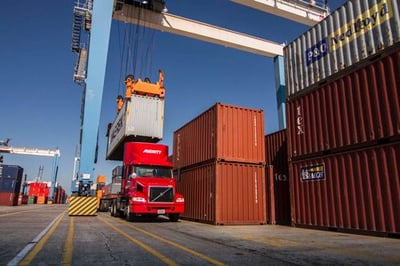 The Boston Consulting Group and C.H. Robinson, a transportation logistics company, estimated that as much as 10 percent of the container traffic from East Asia to the United States could shift to East Coast ports – instead of first landing on the West Coast and finishing the journey by truck or rail. To clarify just how impactful that shift would be, they pointed out that it would mean rerouting a volume of cargo “equivalent to building a new port double the size of Savannah and Charleston.”

At the same time, the Panama Canal Authority (ACP) made a similar prediction, estimating that transits by these much larger box ships would dramatically reduce the per-unit costs of containers shipped to the East Coast from Asia – making this route more competitive with services to the ports of Los Angeles and Long Beach.

Argelis Moreno de Ducreax, senior international trade specialist at the ACP, says "It has happened. We analyze the market share of volumes from Northeast Asia to the U.S. East Coast using the Panama Canal, to the West Coast using the intermodal system, and coming through the Suez Canal. Since 2016, Panama's share has increased from 43 percent to 48 percent, and the intermodal share has decreased from 27 percent to 20 percent."

A Shift to The East

Aiding this rapid change was the fact that several U.S. ports acted early, undertaking their own expansions to accommodate the New Panamax vessels and investing billions in dredging, construction, and equipment purchases to take advantage of the increased flow.

Charleston and Savannah are already setting records. The Port of Charleston worked its biggest cargo ship on record in April, and the State Ports Authority says more than 204,600 TEUs crossed its Mount Pleasant and North Charleston terminals in April alone. That’s a 4.2 percent gain from the same month last year.

Meanwhile, the Port of Savannah, currently the nation’s fastest-growing port, moved 4.35 million TEUs in calendar year 2018, its highest annual volume ever, and a 7.5 percent increase over 2017.

“Since the opening of the expanded Panama Canal, Garden City Terminal has experienced meteoric growth,” said Georgia Ports Authority Executive Director Griff Lynch. “We’re now handling more ships, bigger vessels and larger cargo exchanges. By working more weekly vessel calls than any other East Coast port, and serving more neo-Panamax ships than any other port in the U.S. Southeast, Savannah has strengthened its position as a vital gateway to the global marketplace.”

(By comparison, Savannah handled 3.7 million TEUs in 2015. They expect to be handling more than five million TEUs per year by 2025.)

In Louisiana, the Port of New Orleans moved more containers in 2018 than any other year in its history – an increase of over 12 percent from 2017. The Port of Houston broke three records in 2018; including a 9 percent increase in total tonnage from 2017, a $33 million increase in operating revenue over the previous year (for a total of $336 million), and an $11 million increase in total combined business through the port’s public facilities – for a record $162 million. 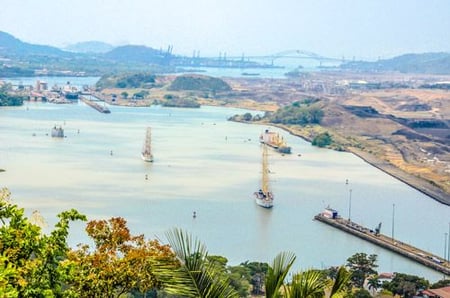 Without a doubt, these are the kind of numbers that should make shippers sit up and take notice.

The impact of the Panama Canal’s expansion is certainly being felt. Shifts in freight from the West Coast to the East are underway, decreasing the demand for West Coast intermodal, rail, and longhaul capacity. Granted, this is good news for shippers in the Southeast, since more freight is being delivered to population centers in the East. It also puts the Midwest very much in play, as Savannah, for example, is 1,000 miles closer to Chicago than Los Angeles.

While the long term effects of the Panama Canals’ expansion won’t be clear for some time, it’s safe to say that the trend points to continued growth and stability for the Gulf and East Coasts, and potential losses in the West.

If you are interested in determining whether or not rerouting your cargo from the West Coast to the East via the Panama Canal would be beneficial to your business, contact the Averitt International team at international@averittexpress.com. We will examine your current strategy and help you identify opportunities to save time and money across your supply chain.