Many shippers have modified their operations to adapt in a COVID-19 world. In some cases, that’s meant responding to supply challenges. In others, it’s meant changing their manufacturing process to produce badly needed safety equipment.

However, this is the story of a company that didn’t even exist prior to the coronavirus outbreak – and went from 0 to 60 at a breakneck pace.

From the moment eOn Sanitizing MistTM was conceived, to the day CVS picked up its first 60,000 units, 24 days had passed. That’s barely over three weeks. And it all started with a visit from Dad.

“About a week before the lockdown order came in Los Angeles, my dad had stopped by,” says eOn Mist LLC founder Austin Hurst. “He brought over a big bottle of hypochlorous acid and said, ‘Use this as a sanitizer instead of traditional disinfectant. It’s cleaner, it’s safer and it’s ecofriendly.’ At the time, I’m thinking, ‘That looks like water. How is that supposed to kill the virus?’ But then the mayor of LA locked everything down – restaurants were closed, shopping centers were closed. We really had nothing much to do but sit there, locked inside, and stare at this product.”

It’s worth remembering that this was in early March, when “stay at home” was just coming into play. Even
though Los Angeles imposed a lockdown earlier than many other cities, the fear was still spreading rapidly
across the country. Hand sanitizers and disinfectant sprays were disappearing from store shelves.

“After doing a little research, we asked ourselves, ‘How do we take this product and put it in a form that people can easily use?’ At this point, my partner and I had no background in this kind of thing, so we looked to things we knew. I liked using the popular misting bottles you’d get at the pool, or as a promotional product, so we dug into those.”

In order to create a continuous spray of product, these companies were using a technology known as BOV, or “bag on valve” – which, unlike aerosols, doesn’t use any harmful chemical propellants mixed with the product.

“That’s why you see BOV used for things like sunscreen and cooking oils,” says Hurst. “The product is in a bag, in its pure form, and compressed air forces the liquid out in a continuous spray. At the time, I didn’t know any of this. I just knew I liked the product. So we looked into who was manufacturing the cans.”

That Was Just The Beginning

“Every time we make a can for a customer, it requires seven different suppliers to complete the job,” Hurst
explains. “We have the valves, the bags, the cans, the corrugated box, the commercial printer for the sticker and the contract filler for the cans.”

The seventh supplier? “That’s Averitt coming in to ship it,” Hurst says. “We wouldn’t be in business if it weren’t for Averitt.” To go from an idea to having CVS pick up 60,000 units on day 24 took a lot of hard work, a lot of all-nighters
and adapting to a supply chain that wasn’t necessarily accustomed to such a feverish pace. Which is where the Averitt part of the story begins.

“For our very first shipment of raw materials, we didn’t have a process in place yet, so we used [online
transportation broker] Freightquote,” Hurst says. “We had to get six pallets of our liquid bulk from Little River, SC to our filler in St. Louis MO. We had time booked the following Wednesday, and if we missed that window, we were going to be dead in the water.”

Freightquote connected eOn with a well-known freight carrier that picked up the totes and got them on their way.

“The pro number on their website told us the shipment had arrived in St. Louis, and that it would be held over the weekend and delivered on Monday. So we had all our components, and we were ready to go. At this point, we’re all celebrating. “Monday morning, I get up and check the tracking, and it says they’re now on their way to Atlanta GA,” Hurst says. “My heart skipped a beat.”

What followed was an exercise in phone trees and frustration as he spent the next five hours trying to get
answers.

“They told me they couldn’t stop the truck, because it could only go from terminal to terminal,” he says. Instead, he had to fax a reclassification form saying that as soon as the shipment arrived, it had to be
reclassified for the original address. “I remember calling the terminal in Atlanta and asking if they got my fax,” he says.

“They said the person who would’ve received it was out, but that nothing would happen to the freight until the next morning. So I wake up Tuesday morning, refresh the pro number on the website, and it tells me the six totes are now in Tampa FL – even farther from the departure location, and just sitting in the
hot Florida sun.”

At this point, Hurst describes himself as flabbergasted. “I call them and say, ‘What happened? We’ve got to get these to St. Louis by tomorrow morning.’ They tell me, ‘Oh, no, there’s no way to expedite that freight.”’

Desperate, he called a friend who had his own freight business. “I said, ‘Help us!’ And he said, ‘There’s only one company in the industry that can do it that fast. And that’s Averitt.’”

Through his friend, Hurst was able to connect with Averitt Executive Vice President of Sales and Marketing Phil Pierce, who put him in touch with Specialized Services Manager Teresa Graham. Graham and her team found a truck roughly 60 miles out of Tampa that could pick up the totes.

“Averitt came to the rescue. Those drivers went nonstop, and we tracked that shipment all night long. I remember waking up to a phone call from the facility in St. Louis telling me the totes had arrived, and the line was going to start on time. 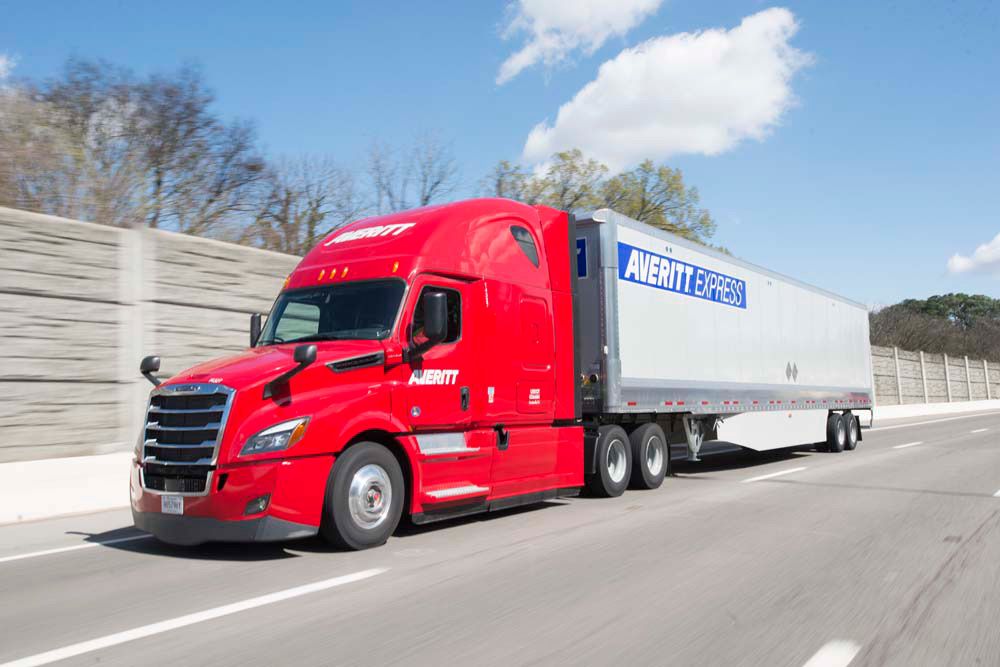 “And that’s why the CVS order shipped on day 24 of the business – because of that freight getting rescued by Averitt. There’s no other company in the United States that could pick up 2,600 pounds of cargo and get it 17 hours (more than 1,000 miles away) across the country with the snap of a finger.

“That’s my favorite story,” says Hurst. Since then, Averitt has become eOn Mist’s exclusive LTL partner, helping ship over 5 million total units in the first 143 days of operation alone. And those shipments aren’t
limited to the original disinfecting spray.

“We’ve moved into hand sanitizer using the same continuous spray approach. So not only can you control
exactly how much you’re getting, it doesn’t leave a sticky sludge on your hands like those glycerin-based gels.” And finding better ways to serve its customers is what motivates everything eOn Mist does.

“For us, it’s about saving lives and having a social impact,” Hurst says. “That’s the mission and vision here –
having a product that actually does good and has a good path forward. Because even after the pandemic is over, I think people will be using sanitizers and disinfectants more frequently than they used to.

“There’s definitely an impact that this kind of product will have in the marketplace for many years to come.”