Yukon Outfitters: Pivoting In A Pandemic

It would be fair to say that Yukon Outfitters has always had a knack for “adaptation.” For proof, you don’t have to look any further than the story of how the company got its start.

Back in 2009, the company’s president and co-founder, Preston Powell, was working in Hong Kong when his employer refused to pay him an earned sales commission. Amused by Powell’s plan to leave and go into business for himself, his then-boss said, “it would take a man on a mission to build what I’ve built.” The very next day saw the creation of The MOAM (Man on a Mission) Group, which serves as Yukon’s parent company.

A leading manufacturer of top-quality sporting and camping equipment, Yukon Outfitters supplies major retailers throughout the Southeast, in addition to having a robust online presence. What truly sets Yukon apart, however, is the fact that many of those products are made right here in the USA.

Back in 2014, Powell moved what was then primarily an import-only business from North Carolina to the small town of Alamo, in west Tennessee. In their new cut-and-sew facility, which had previously served as a children’s garment factory, the team began producing hammocks, sleeping bags, backpacks and more. Before long, the Yukon Outfitters brand was in more than 14,000 stores throughout the U.S. and Canada and had a presence in 13 different countries.

A Pandemic Threat To Business As Usual

The company was growing, and its future looked bright. Then came 2020, and with it, COVID-19.

“We started to see ripples in our customer base in mid-March,” says Powell. “At that time, most folks in the Southeast thought of the pandemic as more of a ‘big Northern city’ problem.” But that changed in a hurry.

“We had truckloads of hammocks that were supposed to ship out to national sporting goods and hunting retailers. And within 36 hours, every one of them either canceled their POs (purchase orders) or chose to ‘indefinitely pause’ their shipments.”

As the cancellations piled up, the first priority for Powell and his management team was the 27 people on the factory floor who now had no orders to fill. How could they keep them working?

When Circumstances Change, Make A Pivot

After discussing it internally, they realized that what had not emerged yet in those early days of the pandemic was a reusable face mask solution. (If you think back to those early days of panic-buying and empty store shelves, face masks were simply not to be found anywhere, at any price.)

As a cut-and-sew operation with a highly skilled workforce, Yukon Outfitters had all the tools it needed to find a solution.

The next hurdle was identifying the proper fabric. After a little digging, Powell found a white paper published by the Centers for Disease Control and Prevention back in 2004 in response to the SARS epidemic going on in China. The paper outlined basic measures for face coverings and said that in the absence of a true medical-grade mask, a poly/cotton-type material with a tight weave was a suitable option.

But where to find the material? Well, as luck would have it, the company was sitting on roughly 60,000 yards of high-quality T-shirt fabric that had come with the building it purchased six years earlier.

Powell laughs when he recalls how many times over the course of that six years he had to fight to keep his team from throwing the fabric away. “It was quality fabric. Good, beefy material. A lot of those mills aren’t even open in this country anymore. That’s why I didn’t want to get rid of it.”

His team pulled the hammocks and backpacks from the line, unrolled what seemed like miles of fabric, and started making face masks.

Fulfilling A Sudden And Growing Need

The first samples went to retailers – the company’s normal customer base. But at that time, many of them didn’t see the need. “They were like, ‘Is this something I have to worry about?’” Powel says.

Another approach was necessary to ensure his team would keep working.

A small portion of Yukon’s business over the years had come from producing promotional materials for a wide range of businesses – everything from oil and gas companies, to power utilities, tire manufacturers, and more.

“We dusted off those old addresses and sent some samples out,” Powell says. The response was immediate. “Early on, they understood the need to keep both their customers and their employees protected.”

An existing customer provided another outlet. For several years, Yukon had been printing and sewing headbands for a popular sportswear brand in Cincinnati. As a result, there was a wide range of popular and attractive patterns and designs on file. Applying those patterns to face masks seemed like a natural next step. “We tried it, and the customer’s printed mask sales went through the roof,” Powell says.

Within a span of 72 hours, the company had two different mask lines in production – one for industrial use, and one geared more for fashion. The first week, Powell and his team were excited to do 700 pieces a day. Within two weeks, they were producing close to 7,500 a day.

This ability to quickly pivot and produce a much-needed product didn’t go unnoticed. On a conference call with several Southeastern governors and their emergency response teams, Yukon was among those companies recognized as the 20 most capable sewing manufacturers in the country.

“For our little factory in Alamo TN to be recognized not only as someone who could deliver, but also move so quickly, it really allowed us to punch above our weight in terms of output and production efficiency,” says Powell.

Since the beginning of the pandemic, many companies, including Averitt, have been able to provide their associates with face masks thanks to the team at Yukon Outfitters.

In all, Yukon Outfitters produced over 568,000 sewn, reusable face masks in just 63 days.

Best of all, a situation that began with concern over how to keep its current staff of 27 employed quickly turned into the need to bring on additional staff. “We ended up adding six more people. I would’ve added 20 if I could’ve found them. But you can find more professional quarterbacks than you can qualified sewers in this country.”

Through it all, the focus on people over profits has remained consistent. Not only did Yukon Outfitters price its masks to cover the bare minimum of materials and labor, but the company also donated masks throughout the community, including to schools and nursing homes.

With The Help Of A Strong Transportation Partnership 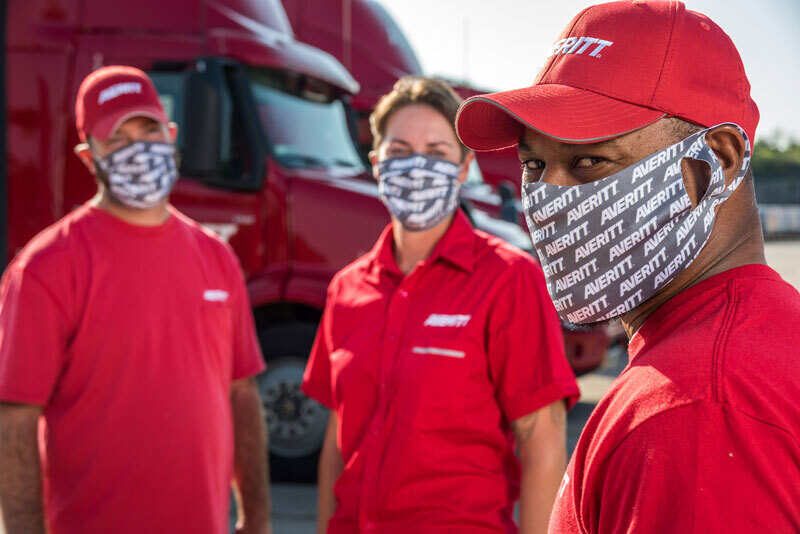 As with many growing brands, Yukon Outfitters eventually found itself in a position to drastically increase its sales and production for its outdoor gear. Meeting the demand, however, would require a renewed focus on its supply chain.

“We’d done a little LTL with Averitt over the years, but in 2014 we had a huge opportunity with a brand-new customer. We brought three containers of product through the Port of Memphis,” Powell says. “We basically had to figure out how we were going to drop-ship to 15 different stores on a weekly basis. So we called in three different trucking reps.

“One left his business card. Another sent pizza to the warehouse. But Doug Granito from Averitt rolled up his sleeves and helped us unload those trailers. He stayed until the job was done, and in the process helped show us better ways to achieve the results we were after. That showed me that Averitt has a culture similar to ours, understanding the need to get things done. It’s not often you find a company that shares your values like that. Especially in the transportation industry.”

Keeping Up With Retail Demand

Meeting the supply chain demands of a growing business, Yukon Outfitters relies on a variety of transportation services.

With shipments of products and materials arriving at the Port of Houston every month, Averitt drays numerous containers to its Distribution and Fulfillment Center in Austin, TX. From there, products are sorted and checked for quality before being distributed to numerous locations throughout Texas and beyond.

To improve efficiency and reduce overall transportation costs, Averitt uses return containers to make deliveries to Yukon Outfitters’ customer locations heading back to the port. At the same time, Averitt can ramp up LTL and full-load services to meet seasonal and sudden consumer demands.

Since 2014, the relationship between Yukon Outfitters and Averitt has only strengthened, and the future for both partners continues to look bright.

“As a business, if you’re not willing to be nimble, quick and decisive, then you’re not going to be around,” says Powell. It’s a lesson Yukon Outfitters has taken very much to heart.

Averitt is a leader in customized supply chain in logistics solutions. With more than 20 distribution centers in the U.S., Averitt can help you streamline your freight and inventory distribution needs just like Yukon Outfitters.